Fitbit Zip: A Pedometer and More 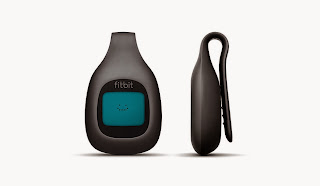 A couple of months back my employer sent out emails detailing a health and wellness sort of program/competition they were setting up.  I got through maybe the subject line then filed it in the trash.  I missed the part about the free gadget.  Once my coworkers asked if I had signed up since they'd be giving us free Fitbit Zips, I suddenly became interested.  "No thanks, I don't need another gadget" - said no geek ever.


The company website has a great rundown of all the features, specs, battery life, etc.  Instead of just repeating what they've already done (and much better than I), I'll just recount my experience with it.

Very simple packaging, notably absent of any significant instructions or software of any kind.  Only the Fitbit Zip, a bluetooth dongle, and a 'tool' to remove the battery cover.

I decided to pass on setting up yet another driver on my pc and decided to strictly use my smartphone to do the syncing to my Fitbit account.  Setup was cake.  I downloaded the free app, enabled bluetooth, launched the app and told it I wanted to setup a new Fitbit Zip.

After a minute or two it was done.  With no buttons you simply tap the device and it changes between it's four display modes: miles traveled, calories burned, steps taken, and a smiley face. 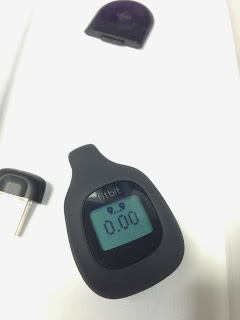 I found it to be fairly accurate.  More so than a standard mechanical pedometer.  The fit bit relies on accelerometers so it's quite a bit more sensitive.  I started wearing it on my runs, and noticed that it was around 1/10 of a mile short for every 2 or so miles I ran.  Logging into my Fitbit account online I found a setting for a walking stride and a running stride.  Adjusting this a bit brought it closer in line with my Garmin.  I of course didn't expect it to be as accurate as a GPS, but it did a fair job once adjusted.

I was also impressed with it's water resistance.  More than once I forgot that I had it attached to my running belt, which I soak in water after a sweaty run to get the stink out.  The Fitbit stayed submerged for a number of hours each time before I realized where it was.  The battery compartment has a sealing 'grease' and rubber seal that helps keep water out.  The battery compartment is the only seam on the device.  I had been using it in the included belt clip holder which fits around the Fitbit like a rubber sock, it seemed when I removed it after pulling it out of the water that moisture didn't make it past the rubber holder, more less the battery compartment itself.

All the activity you log with your Fitbit, can be uploaded to a website for logging, competing with friends, tracking your caloric intake and burn for each day etc.  To aid in this the smartphone app has a food database to help you enter foods for that day.  I've seen apps that serve this purpose alone and can be very effective in helping with weight control.  The advantage of the Fitbit is that you also have a pedometer logging in how many calories your burning as well.

You can 'zoom' in to any statistic to see closer detail of that stat across the day.  Pretty easy to see when I was running or when I was sitting on my butt.

Battery life is supposed to be 4-6 months, I can say that with 2 months of heavy use, the battery meter hasn't dropped at all.  In all I was pretty impressed with the device.  Although I'm not sure I would have dropped the $50 to buy one myself.  Still, it is cheaper than a GPS watch like a Garmin.

It does also come with a bluetooth/usb device so that if you want to sync directly to your PC/Mac you can.  I'm guessing they could offer a 'non-bluetooth included' package and drop around $10 from the price... that would make it feel a bit more reasonable.
Posted by Spaten at 2:40 PM