Hearthstone Beta - It's That Good 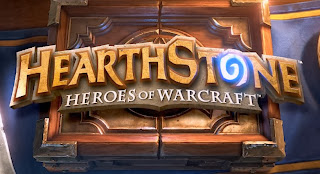 In case you haven't heard, the makers of the World of Warcraft, Blizzard Entertainment, have been working on a software based trading card game (TCG) called Hearthstone.  It's very similar to most other TCGs like Magic the Gathering, etc.  Except that it's all virtual, and based on the characters, classes, spells, and other IP from the World of Warcraft.  Thus assuring that I'll spend way too much time playing it. 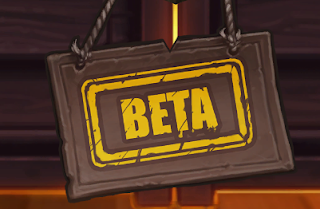 A few weeks ago blizzard started sending out closed BETA keys for some users.  Not being one of thoes lucky early few, I spent the next weeks listening to podcasts and reading posts about peoples first experiences with the Hearthstone beta.  Painfully taunting to say the least.  Finally a few days ago I had a BETA invite show up in my inbox; and with that all productivity immediately took a hit. 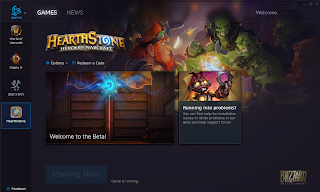 The first thing you have to notice is that along with the Hearthstone install, you also install the new Battle.net desktop app.  It's also still in BETA, but can be downloaded and used by anyone.  This is Blizzard's unified launcher, similar to Steam, allowing you to launch or update all of your installed Blizzard games such as Diablo, World of Warcraft, StarCraft, etc. all from one place.  Your login id, password, and authenticator codes are all entered in this app, then you are launched straight into your game.  One thing seemingly missing is the ability to chat with other RealID friends from the app before launching into a game, even though you are logged into your battle.net account at the app level. 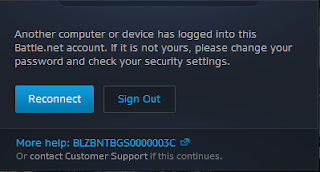 Another annoyance is that you can only be logged into the desktop app from one place at a time.  While this makes sense if you are only able to launch a single account under a game like Warcraft which only allows an account to be logged in once; this app allows me to launch either of my two Warcraft accounts, or other entirely different games.  If the battle.net app is knocked offline by another login, it doesn't kill the already launched game.  Say I have one computer playing Diablo, and on another computer I want to play Warcraft; I have to login to the app, knocking my other computer playing Diablo off of battle.net, so that I can launch Warcraft.  If the person playing Diablo then wants to play Hearthstone, they have to log back into the app, knocking my Warcraft computer off of battle.net..... and on and on it goes.  It would seem to me that the check for a single instance of an app should be maintained at the game/account level as it currently is, and not at the battle.net level.  This and the abscence of RealID chat will hopefully be remedied before it comes out of BETA. 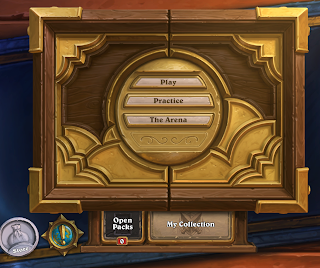 When you make it into Hearthstone, after the cinematic, the opening screen shows you a wooden box with all of your 'stuff'.  It's from here that you can challenge other players, practice against the AI, or enter the Arena challenges once you've unlocked it. 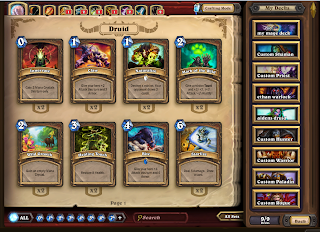 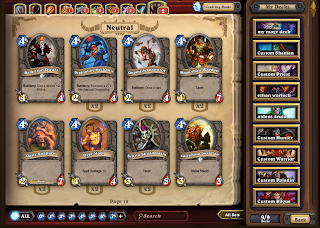 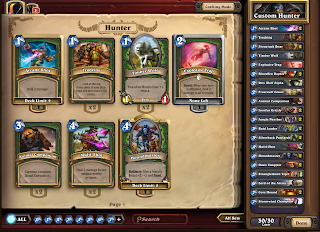 When you're ready to build a deck, you choose which hero class you want to base the deck on.  Each class is represented by a significant lore figure.  Rexxar for the Hunter, Jaina for Mage, Thrall for Shaman, Malfurion for Druid, Uther for Paladin, Valeera for Rogue, Anduin for Priest, Gul'dan for Warlock, and Garrosh for Warrior.  My kids immediately pointed out that there was no Monk class.  Odd indeed. 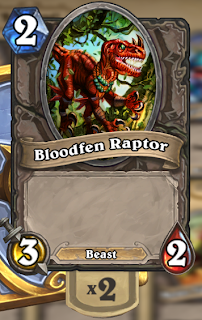 Each minion card has a mana cost to use it (top left), an attack power (bottom left), and health (bottom right).  If you have multiples of that card, it will show as a x# tab beneath it.  Cards, like loot in Warcraft, come in common, rare, epic, and legendary tiers. 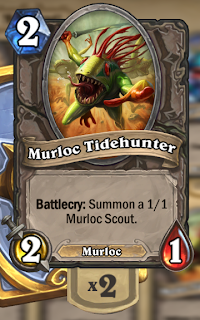 Special powers associated with that card will show in the empty space in the middle.  This could be the ability to heal a hero, cause extra damage, summon extra cards, add attack or health to other cards, etc.  This Murloc Tidehunter card for example has a Battlecry; which means that it performs a special action at the time it is played. 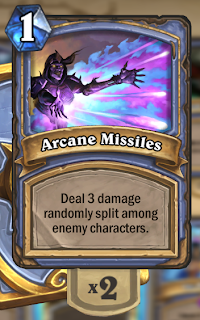 Spell cards are similar but have no attack or health indication, as they are used up at the time they are played. 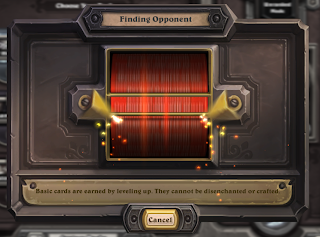 Choosing to challenge someone sets the game off looking for a suitable opponent.  Your heroes level in the same way that they do in Warcraft, and gain class specific skills (cards) as they level.  Your mage at level 1 is much weaker than she is at level 8, and so needs to be matched to a similarly leveled opponent. Once your matched, a coin toss is performed to determine who goes first.  If you loss the toss, you are given an extra card from your deck to start with, as well as the coin itself in the form of a 0 mana cost card that can give you an extra mana on a particular turn.  You can choose to return any number of your starting cards to the deck, in the hopes of getting better ones if you'd like. 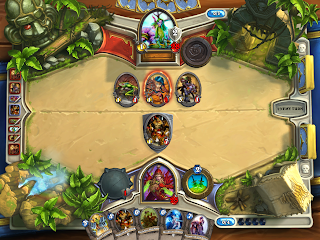 Game play is simple enough for my 9 year old to start playing with about 30 seconds of explanation, and even that seemed to be too much for him.  Communication between you and your opponent is limited to only a few common emotes such as "well played", etc.  This removes one of the concerns I always have with my kids playing Warcraft; so it feels like a very 'safe' game for the young ones. 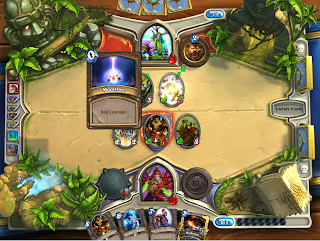 Your first turn gives you only 1 mana to work with.  With each subsequent turn your mana is increased by 1 and replenished.  Hence the strategy around keeping a good balance of lower and higher mana cards in your deck. 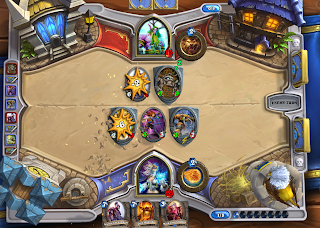 When a card is played, minion or spell, it's shown to both players and followed with some sort of animation, sound effects, etc.  all very cool and all playing off of known Warcraft lore and memes.  The Raid Leader card, which gives all other minions +1 attack, announces "..hit it very hard.." when he attacks.  A reference to the Ventrillo recording of a crazed raid leader account of an Onyxia raid team not performing well enough for him.  If you haven't heard it.. take a look, fair warning there's much language - not for kids. 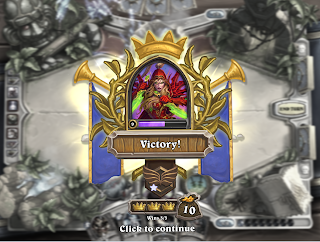 Winning gives you XP to level, and possibly works towards completing quests like winning 3 times in one day with a particular hero. 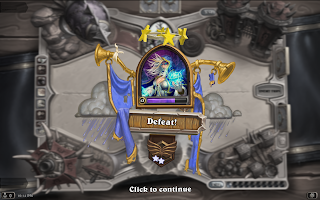 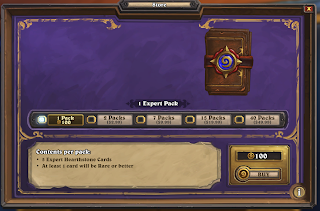 Winning also awards you gold, which can be used to buy packs of cards to add to your collection.  In each pack you're guaranteed to have at least one 'rare' quality card.  You can also purchase cards with real money.  Being a free to play game, this is the one revenue stream that Blizzard is counting on.  Having played for a few days, I think it's completely reasonable that you can play the game without spending any money.

There's whole aspects of the game I won't continue into such as the Arena challenges (for even better loot), rated play, and crafting (the ability to disenchant cards to craft new ones).  All this makes it a very full, complete, almost ready for release feeling game.

In all it's a great game and a lot of fun.  "Easy to play, difficult to master" certainly comes to mind.  The mechanics of the game play often see matches turn on a dime, which always makes for fun and exciting play.  This along with the expected release of an iPad version sometime in the future seems to make Hearthstone a sure hit.  Did I mention it will be free?
Posted by Spaten at 12:24 PM