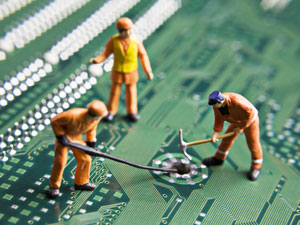 I'd been using an Onkyo SR309 receiver with my PC setup for around 18 months.  Being that I spend a great deal of time at the computer, and my music collection is on the computer, it's the listening location of choice.  The technical requirements for audio gear hooked up to my PC isn't anything special since I only use stereo (left/right channels only) sound.  Really the only thing I need besides decent power and sound quality is a digital optical input to receive audio from the PC.  Because of this I've never invested too much in my audio gear.  I might have spent $170 on this Onkyo.

Then one day I power it up, hear the usual series of relays inside it clicking on, but no sound.  Trying all sorts of inputs/outputs and testing I come to realize that something isn't working on the amplification side of the unit.  Unfortunately it's not an obvious blown fuse, or resistor that I could easily track down and replace myself. 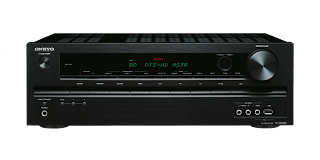 I was furious that a decent piece of gear would go out after only 18 months, 6 months past the meager 1 year warranty.  Looking through forums online, the repair record of 'authorized repair locations' wasn't very good either.  Lots of people with units lost, damaged, or with expensive shipping charges to send it back to the factory while waiting weeks for parts to come in;  all with no guarantee that it would be fixed.

So what was my option, start shopping for a replacement?  The cost was only a small part of my angst.  Even more significant to me was the waste of the situation.  A significant sized piece of electronics was headed to the landfill after only 18 months just because it didn't hold up very well, and there was no reasonable way to repair it?  And how well would the next piece of gear hold up?

After wrestling with what to do for a week or two, I decided to check eBay on a whim.  Figuring that instead of introducing a new piece of electronics into the waste cycle, I might be able to reuse somebody else's used gear.  And with that the door was opened.

Having never looked before, I guess I just didn't realize how much vintage audiophile quality gear there is out there on eBay.  A good rule of thumb is that if you've never heard of the brand, and it isn't sold at Wal-Mart of Best Buy, then it's quite possibly really good stuff.

After consulting with a coworker who has been into the audiophile scene for a few decades, I focused my search on a few brands. B&K, NAD, and Adcom.  Oh my, what bargains to be had!  The fact that I didn't need surround sound of any sort, HDMI or any video capability for that matter, played very well.

I honed in on a NAD 7100 Tuner / Amplifier.  The old school buttons and knobs and segmented tuner display was enough to draw me it on it's own.  Researching further, the specs were incredible.  This was a high quality piece of gear that was WAY out of my price range when released around 1989.  Wait 23 years and you can find one for a relatively affordable price of $100 - $300 depending on it's condition.  I'd still need a pre-amp that could take an optical digital input, but based on what I was seeing on eBay, I could pick up one of those for around $150 as well. 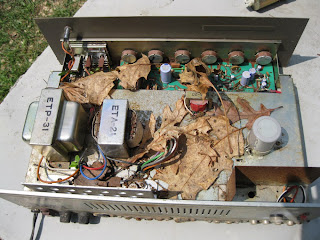 Now, buying 20+ year old electronics off of eBay is not without it's risks.  Most of these components are being sold 'as-is'.  When considering amplifiers of this quality, you're generally looking at a weight of 20-30 lbs.  So expect significant shipping costs.

I started tracking various 7100's on eBay, and targeted one with a well rated seller, who claimed the unit was tested and working fine.  Won the auction for around $92 + $35 for shipping.  Couple of weeks later, it showed up, only after the FedEx delivery person literally 'dropped' it on my doorstep.  The seller packed it very well, as is necessary for something so heavy.

Unpacked it, hooked it up..... everything lit up, but no sound.  OK, maybe I had something wired up wrong.  Carefully went over every connection, ensured an audio signal was getting to it, still nothing.  It was eerily the same as my Onkyo.  Everything seemed to be fine, except there was no sound.  It had to be on the amplification side of the unit. 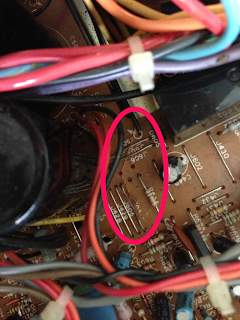 After making sure I had turned every stone, I contacted the seller, who pointed out a couple of things to check, which of course I had already gone over.  I opened the unit up and started looking over every relay, resistor, looking for some sign.  Then I stumbled on it.  There was a 4 inch or so crack in the amplifier circuit board.  Through both sides.

Contacting the seller we worked out an agreement and he refunded me half of my cost including shipping.  The damage did most likely occur in transport, the crack is next to the very heavy transformer, and these old circuit boards are quite brittle.  I hadn't asked for shipping insurance.  Needless to say, I do every time now.

I had to decide whether to just try to sell it for parts, as there were some being sold for that.  Or to try to repair it myself.  It wasn't like I could break it, so I decided to give it a try. 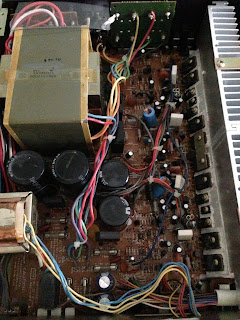 These old boards are generally only 1 layer thick.  So I figured I only needed to figure out what circuit paths were broken by the crack, and jump them myself.  Problem is there's no way to tell what's connected to what from the top  of the board. 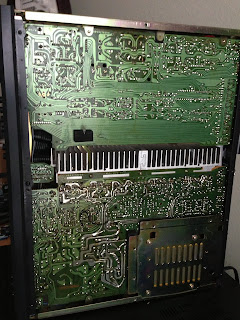 I dismantled the rest of the casing, so that I could get to the bottom of the board.  There I could clearly see the crack, and all the circuit paths that were now open because of it. 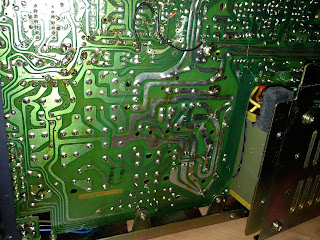 It's visible there at the inside corner where the transformer fits in. 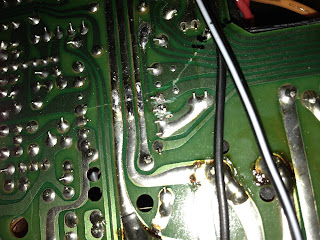 Around 14 paths were severed in all. 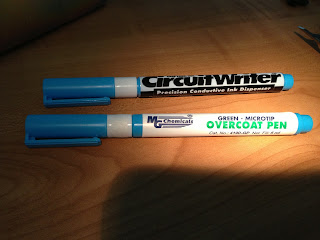 Being a lazy engineer, I of course tried to find the easiest path.  I found these awesome 'Circuit Writer' and overcoat pens.  They write in electrical tracings and coat them! 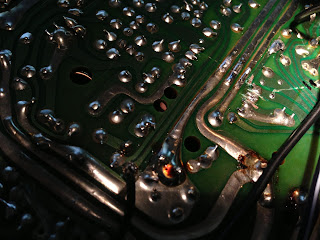 This sort of almost worked.  But they are mostly designed for flat surfaces where a tracing may have been scraped off, or for prototyping.  The crack in the board was just too much for the pen to bridge.

So I decided to follow the break point in the tracing back in each direction to the closest solder points.  Then simply solder a jumper wire from point to point. 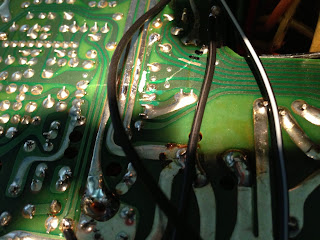 This seemed to be working quite well.  The biggest challenge was keeping my mediocre soldering skills from shorting out paths.  Most of these solder points were very close to one another.  To help, I used the green overcoat pen to seal the adjacent surfaces before I started soldering next to them. 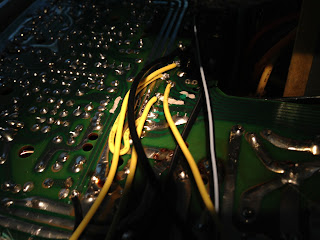 One by one I soldered the jumpers, then marked the break point with a marker to make sure I didn't miss any.  A few hours and many solder iron burns later, I had them all done. 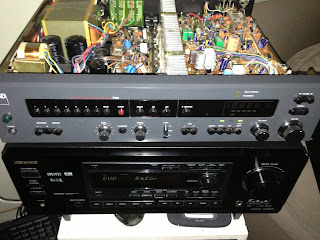 I carefully slid the transformer back in place, tidied up the wires so that the casing would fit back in place, rolled it over, hooked it up, and hit the switch.  It powered up on the first try, and sounded great!  I do have to be careful not to move it around too much for fear of cracking the board even further. 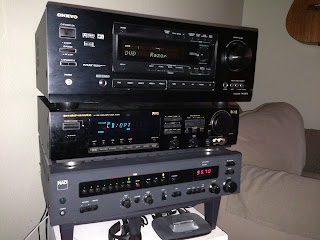 So for around $65 I resurrected a $1000+ piece of quality audio gear, without dumping another $200 or so on a new component to add to the landfills.  Now I just need to stop buying more gear off of eBay.  It's often such a good deal, it's hard to resist!
Posted by Spaten at 3:49 PM