Castle Doctrine (the Game) - Protect Your Money and Family, or Just Steal Your Neighbors 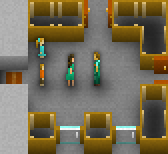 It's 1991, and things are bad.  This is the lead in at the top of the website for a new indie game called Castle Doctrine.  It's an MMO game which is summed up in my title.... Protect your money and family, or just steal your neighbors.


Developed by indie game developer Jason Rohrer.  I just happened on an article about one of Jason's previous creations called Chain World a couple of days ago and was intrigued by an attempt to use a video game to create something bigger than itself.  In that case a hope that it could become a myth or legend in it's own right.

It appears that here again Rohrer is using a game to experiment with the human psyche.  I love it.  The setting of the year 1991 provides the backdrop for appearance of the game.  Anytime a game presents itself with such basic graphics, there's usually a meaty game beneath.  In this case not so much in direct game play, but instead in mind play.

You start the game with your house, a big rectangle, a family, a vault, and $2000.  You goal is to protect your vault while still allowing it to be accessible, and allowing your family to escape your home.  This is built using your funds to buy walls of various materials, electrical devices, traps, dogs, etc.  However you'll immediately find that this is a tougher challenge than you'd think.  Direct protection is not always the answer.  Sometimes diversion is a better weapon.  Once you are satisfied with your creation you have to prove to the game that your vault is indeed accessible   If you die trying, game over, you start back from the beginning. 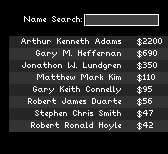 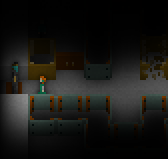 The twist being that you don't just protect your money.  When you leave your house you're presented with a leaders board of who has the most money in their house, how many times people have tried to rob them, and how many of those people have died trying.  To help you in your heist you can spend some of your security budget on 'tools' like saws, crowbars, bricks, guns, etc.  I've seen posts already of people contemplating how they felt after killing a family to steal $23. 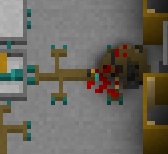 The risk? While you're out figuring whose house you're going to try to rob, your home becomes a target as well.  I've come back home a few times to a death, and no money.  One interesting feature is that every home has a 'security camera'.  So when you return home to a crime scene, you can see the perpetrator and learn from exactly how they did it.  Rohrer has also used this feature to expose cheaters and perma-ban them from the game.

The game is currently in an alpha state, so it's missing many common features like being able to save a security design.  Although given what I've read of Rohrer, he may keep it that way.

He's offering it for a 50% discount at only $8 for the game - DRM free - Mac, Windows, and a code version ready to be compiled for Linux with all upgrades as they become available.