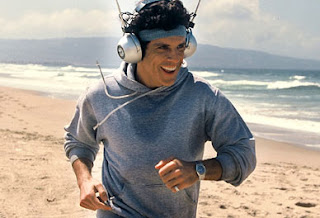 I've been running for more than 4 years now and have found that only one thing has the potential to be more important than your shoes; and that's your music.

I'm the sort of person that always has music playing, no matter what I'm doing.  So when I started running, I naturally had to ensure my music came with me.  What I quickly realized was that any old headphones simply won't do.  Especially ones like above. 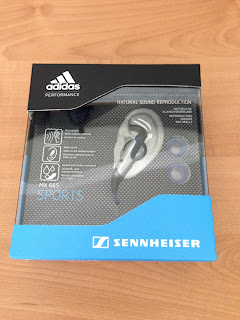 I've been running with Sennheiser MX85 running headphones.  For me, they tend to last around 2 years before sweat and outdoor exposure begins to take their toll.  This time around, when I went to replace them, I found that they had been pushed out by a newer model the MX685.  So I figured I do a write up on what makes these such good running headphones, and how the new model measures up to the old one. 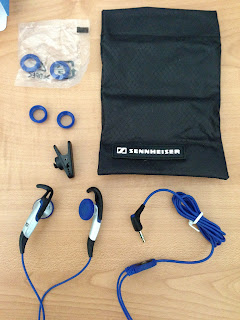 When It comes to running headphones there are a few things they need to have been designed to do:

1. Ear phones need to stay in place
A seemingly simple task when you're walking to the bus, or working at a computer.  But when your bouncing up and down for possibly hours at a time, keeping that ear phone in place becomes a bit more challenging.  You don't want to add constantly putting your ear phones back in place to the list of things you have to worry about while out running.

My first time out I just grabbed my iPod headphones.  I quickly realized that unless your ear cavity was a giant cavern, these tend to pretty quickly work their way loose and fall out of your ear.  Additionally the weight of the cable bouncing around will help this process along.

To remedy this the MX685 uses an extension on the headphone itself that lets you wedge or lodge it into your ear, without being inserted into your ear canal.  The importance of this is discussed below.  Lodging it into your ear structure creates a very solid seat for the headphone.  I can say that in a couple thousand miles of running, I've never had one simply fall or pop out of my ear. 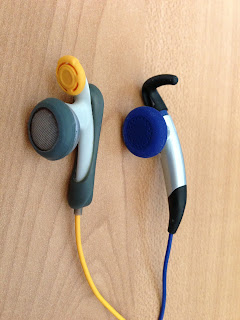 The MX685 looks different from the MX85, but simply has a different structure for the extended portion of the headphone.  In essence it works, and feels the same. 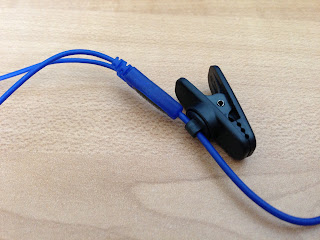 To handle 'cable tug', the weight of the cable itself tugging on your headphones as you run, the MX685 has a clip that has a rotating hook which attaches to the headphone cable.  I clip this onto the back of my shirt neckband.  This leaves only the single smaller wire to the individual ear phone itself as a cable weight.  A weight easily managed by the wedged position of the ear phone.

2. Keep you aware of your surroundings
In ear type ear buds are, by design, intended to provide physical noise reduction.  Again this is something that may be desirable when in the office and trying your best to focus on your work and not the conversation in the next cube.  But it's not what you want when out on the road. 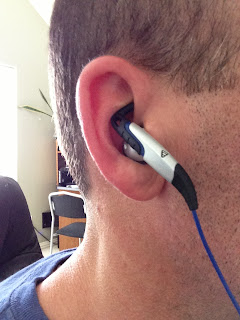 The MX685, and it's MX85 predecessor, uses the wedge position of the ear phone to hold the speaker in front of the ear canal without sealing it off entirely.  This keeps the speaker in the ideal position for good sound quality, while allowing outside noises to make their way in.  I've never had a problem hearing a car turning the corner, tires on the street approaching, or the occasional dog dashing towards me. 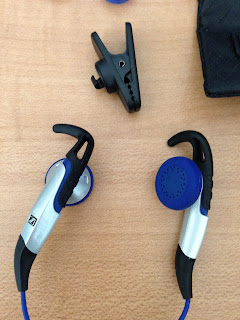 The MX685 has a rubber 'gasket' that helps seal the outside seam of the ear phone from moisture.  Additionally, the face of the headphone has limited holes, allowing fewer paths for moisture to make it's way to the interior.  This factor is what ultimately seems to be the downfall of my headphones.  The constant exposure to high salt content sweat eventually corrodes and breaks down the internal connections.  It looks like the MX685 is a bit better sealed off than the previous model.  Hopefully this will yield me slightly better longevity. 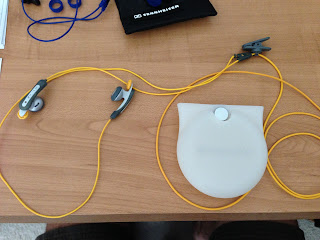 Miscellaneous
One nicety I've always liked about the MX85 is the nifty little magnetic closure rubber pouch that came with them for storage.  The new MX685 instead has a small nylon pouch that closes with velcro.  Not sure I'm as keen on it, so will likely reuse one of my older ones.  Certainly not a deal killer, but something that did change from model to model.

On the plus side, the left and right ear phone leads are now symmetrical   The MX85 had an asymmetrical arrangement, such that one ear lead was shorter than the other.  This is sometimes done with the presumption that you'll be wearing your music player on your sleeve, such that the path to one ear will be shorter than the other.  I always run my wire from my waste up my back and anchor it in the middle.  So my right ear always had this surplus of extra cable flopping around as I ran.  I'm very glad to see the new model has done away with this!

What about sound?!
One characteristic of headphones that I didn't mention is sound quality.  I didn't mention this specifically as it's not a factor that directly impacts any headphones ability to perform while running.  Sure, they need to sound better than a 1970's 13 inch television speaker.  But honestly, between outside noises, your heart pounding, and your own breathing; the sound of your music will be more of a background element than anything else.  $500 worth of sound quality simply won't reveal itself in this environment.

Update:
I don't want to leave the impression that these headphones don't sound good.  They are Sennheiser after all,  and have excellent sound quality.  I was just trying to make the point that sound quality is not all that important when your heart is trying to beat out of your chest ;)
Posted by Spaten at 8:13 PM