Your flat panel... He's not dead yet! 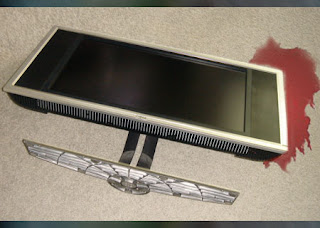 I've been using a Samsung Syncmaster 2232GW for around 4 years now and love it.  The glossy screen makes its colors more vibrant than any other flat panel I've used. 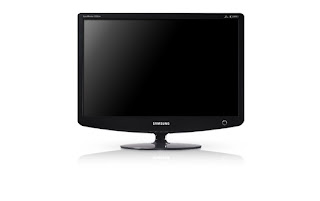 Unfortunately for the past 8 months or so, it's been on a slow decline.  When coming out of sleep the light in the display would flicker on for a moment and then off.  This could usually be remedied by turning it off, then on again.  Of course this slowly grew into having to do it 3, 4, 7 or more times.  Until I found myself cycling it for 10 or so minutes to get it to stay on.  So I did the next logical thing, and set it to never turn off.

This bought me around another 4 months.  Until this past week, when it started to flake out on it's own.  I suppose it was time to look for a replacement.....

After searching for a proper replacement, and even buying one (soon to be returned).  I realized that nothing local had the same quality that I was looking for.  And alas, I am much much too impatient to wait to order one.  Your display is the number one piece of hardware that can define your user experience.  I'm very particular about it.

Almost conceding to having to give up and search for one online, it clicked. Some time back I brought home a 'broken' Dell flat panel from work that wouldn't power on.  I was suspicious that it might be something I could fix.  It wasn't like I could make it any worse.

Taking it apart I found a number of bulging / leaking capacitors on the power board.  Removed them, replaced em, and for around $8 I had a new monitor.

I simply hadn't associated the same potential problem with my Samsung, since it was powering on.  But the backlight wasn't.  A quick google search turned up this wonderful post.  Perfect!  An exact match for my monitor, with exactly the problem that I was suspicious of. 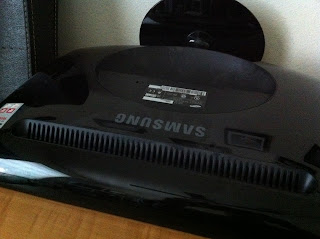 The next challenge was figuring out how to get into this thing.  It's one of those snazzy (yes I just said snazzy) housings where everything is smooth and shiny with no surface screws of any kind.  Another quick bounce to google and..... this wonderful fellow geek documented ripping his apart.


So, off to the kitchen, and back with a butter knife.  I scoffed for a moment, then quickly realized that it is indeed the best tool for the job. 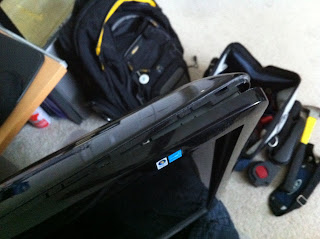 With not too much effort, I was able to start snapping it apart. 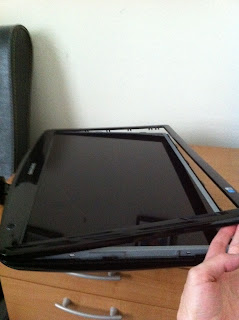 Similar to the video, I worked my way around, leaving the area down front with the buttons for last. 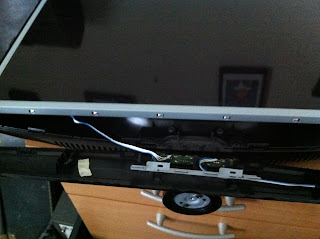 This was why.  Not too much to deal with, but certainly the last thing you want to tackle. 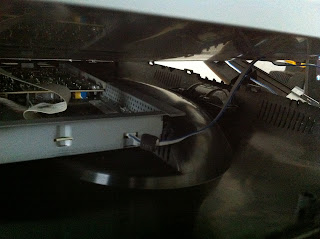 Looking underneath you can see the taped up wire, and the connection to the logic board.  Easily disconnected, and the bezel is out of the way.  Then carefully reach down under the panel and the board housing, removing it all together.  After I did this, I realized that the easier way would have been to flip it over onto a soft surface, like a cake, then just lift the back plastic housing away. 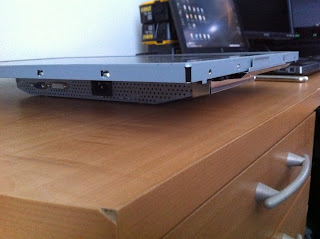 Now to separate the panel from the board housing. 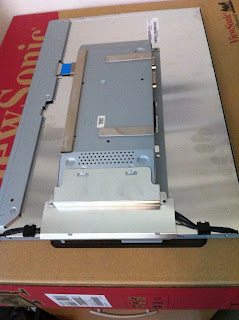 Flip the two parts, as one, onto the face of the panel.  Make sure this is onto a soft non abrasive surface. 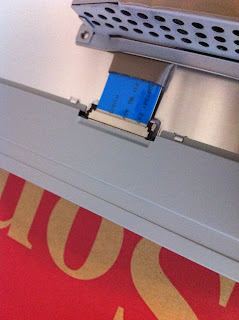 First remove the data cable from the boards to the panel.  It has two small pinch levers on each side of the cable.  Pinch and it slides right out.  If you're having to force it, then something is wrong. 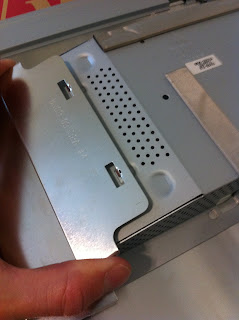 Next, there's a metal cover that is protecting the other cabling that connects the boards to the panel.  There's two easy to loosen tabs at the top that will allow it to be removed. 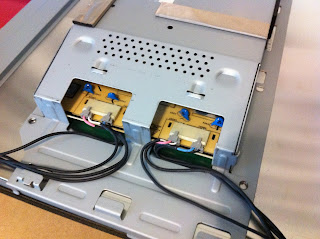 Once removed, you can see the power leads that need to be disconnected.  I recommend taking a photo so you can be certain they go back in the correct places. 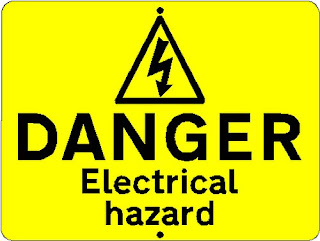 It's here that I'll remind you that you are working in a piece of electrical equipment.  DO NOT ATTEMPT WHILE PLUGGED IN!  Displays like this have capacitors that bump voltage up into the thousands of volts.  And sometimes, these capacitors will hang onto their charge long after they are disconnected from their power source.  This will give you more than a little tingle.  If you're not comfortable with your hands in something like this, than you might want to consider finding someone who is.  Back to the program..... 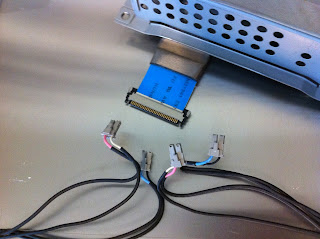 With all the connections removed... 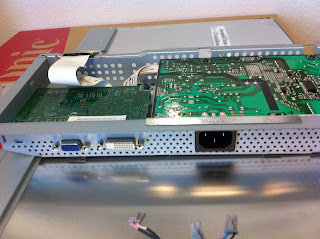 I can move on to assessing the boards. 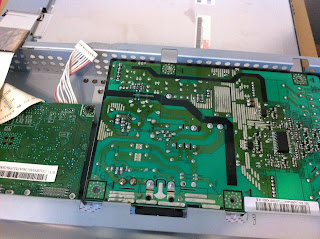 There's usually two boards, or at least two groups of boards, in flat panel displays.  A power board and a logic board. 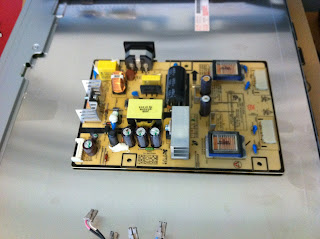 We're concerned with the power board.  It'll be the one that the power connector is mounted on. 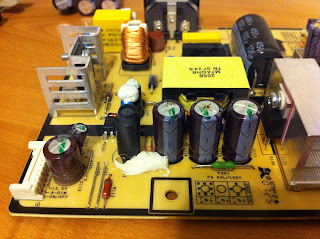 With the power board removed you can immediately see it has the same problems.  A number of capacitors are bulging on top, or even leaking. 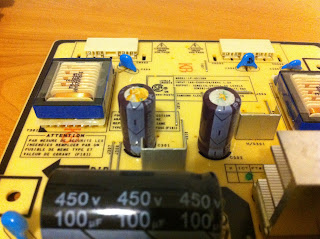 In this state, they no longer have the same electrical properties that the boards are designed to rely on.  And so the circuits fail to operate as they should. 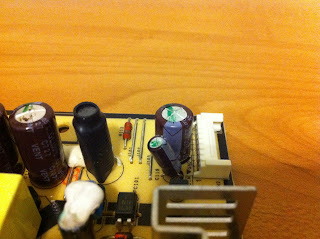 As far as I can tell, this is one of the most common causes for electronics failure.  Mostly due to using cheap components that fail after years of use, and the heat generated within.  So much so that in my searches, I found this site.  Badcaps.Net with tons of forum posts about exactly that. 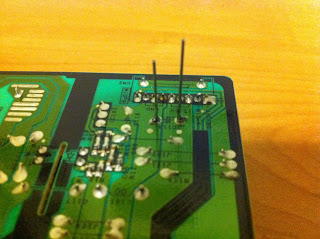 So a quick trip to my local electronics shop, and I was able to find exact matches for everything.  Commenced soldering away.  Not too bad a job either. 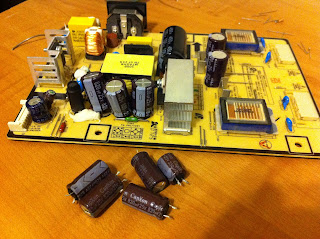 After rinsing and repeating six times, they were all replaced.  Yes I know those 3 look all wonked out.  They were physically bigger around than the ones I pulled out, so I had to stagger them a bit to get them to fit next to each other, without rubbing against too many other components. 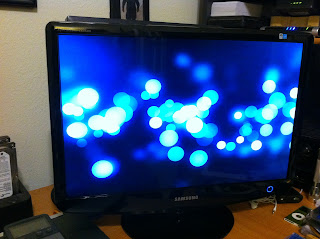 Worked backward to reassemble.  Up to the point that I had the bezel back in place so that the buttons were all reconnected.  I did leave it partially unsnapped just in case.  Hooked it up, powered it on, and BOOYA, first try it came on with no hesitation.  I tried cycling it on and off and it came on first try every time.