Garmin 210 Review: To Upgrade... Or Not To Upgrade 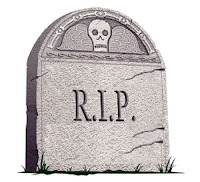 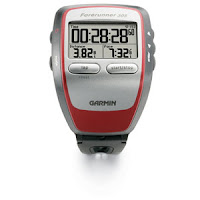 After 320 hours and over 1900 miles together, my Garmin 305 just couldn't stand up to the challenge any longer.

The battery could only keep it powered for around 15 minutes.  And that was if I yanked it off the charger and immediately shot out the door to start running.

A moment of sentiment since it ran with me on all of my first years of running.  Including my first two marathons, thunderstorms, heat, cold, etc.  Then the immediate realization that I had a completely valid excuse to go out and buy a new one!

I did the usual over analyzation of reviews and specs on the internet.  At least in this case my choices were very limited.  Garmin is still pretty much the only game in town for GPS / Heart Rate gear.

The only question was if I could trust a new model to hold up as well, or if I should just go with another Forerunner 305.  They're only around $135 on Amazon these days. 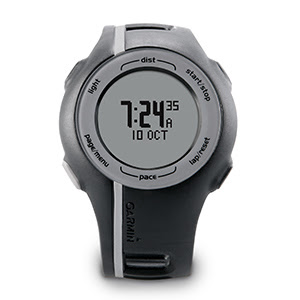 I had already heard poor reviews of the cheapest model, the Forerunner 110.  Primarily due to Garmin electing to leave out the ability to report your current pace..  only the average for the run, or average for the lap.  This made it a no go for me.  I rely on that current pace constantly to give me a kick from behind and keep me on mark.  Finding out that information only every mile just won't cut it for me.  And it really wasn't that much cheaper at $229 with a HR monitor. 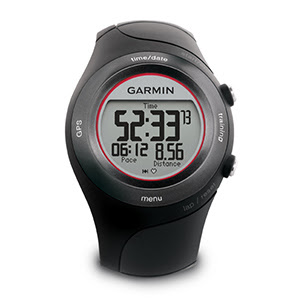 The Forerunner 410 was a curious option at $299 with the HR monitor.  It's predecessor, the 405, was plagued with issues due to it's primary interface being a touch sensitive bezel.  Once people got good and sweaty, the salt and sweat would cause the bezel to think it had been touched.  So your laps would start / stop / reset during your run.  Epic engineering failure.  The 410 supposedly fixed most of the bezel issues.  Still, there were some spotty reviews siting poor battery performance.  It's always hard to determine if those are valid or not.  But they weren't just one or two of them. 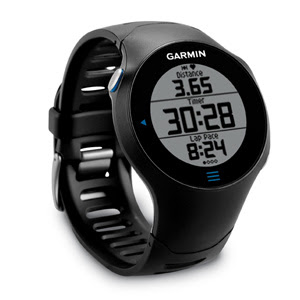 The Forerunner 610 is the newest from Garmin, and likewise the most expensive at $399 with a HR monitor.  Wow, that's expensive.  For that you get some supposedly quicker, easier to lock on GPS circuitry.  A higher resolution display.  And a touch screen for the interface...... really, Garmin.... a touchscreen?  Actually, I played with this one a bit in the store and found it to be very responsive.  The guy showing them to me admitted he was worried about it having the same issues as the 405, but said he hadn't had any come back to the store for that reason.  I was almost lured in by the 'oooooo' factor.

Then my wife found out how much it was.  Amazing that she can smack me in the back of the head using only her eyes...... 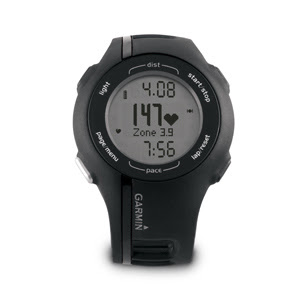 So I handed back the 610, and decided to go with the Forerunner 210.  At $249 with the HR monitor it was pretty well in the middle.  I managed to catch it on sale at REI for $185... This along with a promo that Garmin was running to give you $50 for your old Garmin made it pretty much a no brainer. 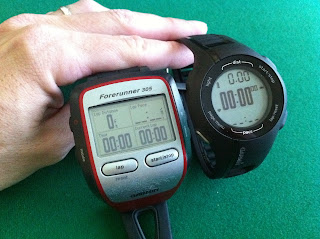 The 210 has the exact form of the 110, but is capable of displaying my current pace.  The biggest change from the 305 for me, besides size, is not being as flexible about what data I can display. 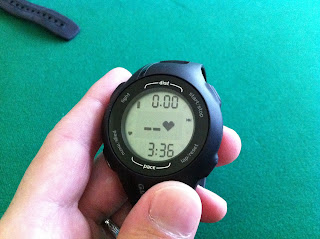 When running it always has the total distance at the top of the screen.  The bottom of the screen is selectable to show either pace or speed.  And of those you can chose either current / avg for lap / avg for run.  This setting is not adjustable during the run. 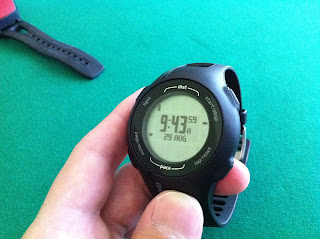 The center of the display has the largest numbers, and can show total elapsed time, time of day, or current heart rate.  You are able to scroll between these during your run with a button press.  Not bad. 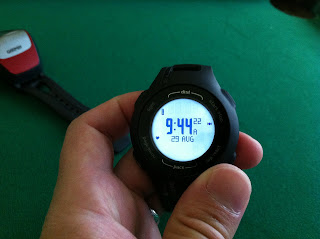 The display light is much better than the 305's dull green glow.  It's a nice bright blue which turns itself off after a set time. 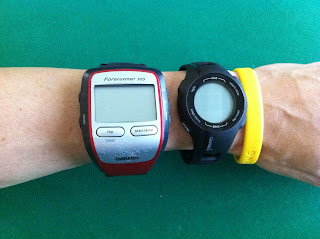 So far I've put around 15 hours and 95 miles in with my 210, and I love it.  The smaller size is exactly what I was looking for after having the 305 beat up my wrists for so long.  My biggest concern, battery life, appears to be a non issue.  I'm not the fastest, so my marathons can have me out running for up to 5 hours (hopefully only 4:30 this year).  I've been out on 2 hour runs so far, and the 5 segments on the battery life indicator didn't drop even one notch. 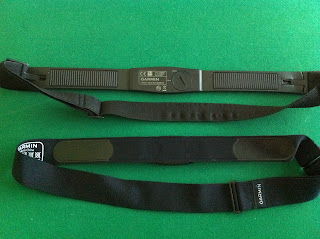 Another great improvement is in the HR monitor itself.  Instead of half of it being a somewhat flexible solid piece of rubbery plastic.  The entire strap is fabric / elastic with two small patches of flexible material for contacts. 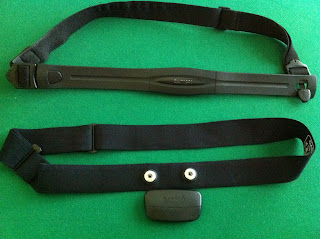 The HR brains are in a removable pod that simply snaps onto the front of the strap.  This allows for easy removal so that you can soak the whole thing for washing. 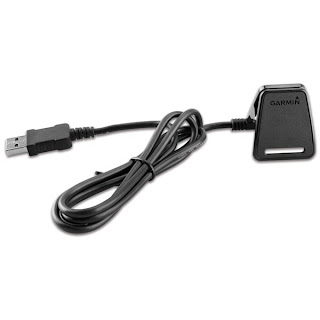 One gripe is around the interface with the PC.  Unlike the more expensive models which connect wirelessly, the 210 has a USB 'clip' that mates with 4 pin points on the back of the watch to charge and transfer data.  It goes on easy enough to get the watch charging.  But to get to PC to see it as a USB device apparently requires it to be just perfect.  I'm getting the hang of it, but I've had many 10-20 attempt moments with it as well.

So there you have it.  Go out, buy you a piece of new running gear, and hit the trails!
Posted by Spaten at 6:11 PM