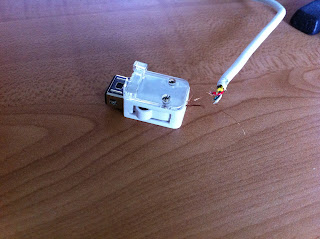 I came home from a business trip to find this on my desk.  My desk, being the dumping ground for broken and hopefully repairable toys.  This one immediately had a special place in the throbbing vein in my forehead.

"Look at it! Did it break while you were beating your brother with it ?!"

The claim is that the plug was 'stuck' and while trying to remove it from the Wiimote that the cable ripped out.  Possible, I suppose. 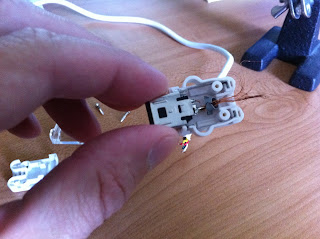 So we get to dismantling the connector. 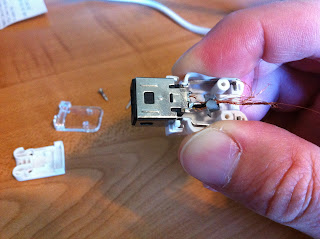 After removing the cover, you have to slightly lift the metal plug while depressing the side latches, allowing it to slide free from the plastic housing. 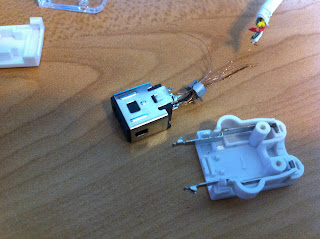 This is much trickier than it sounds. 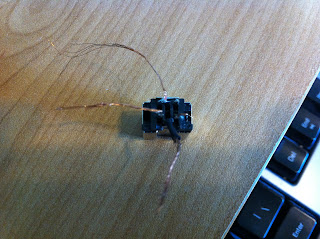 Looking at the back of the plug there are 6 terminals.  The challenge of course, figuring out which is which. 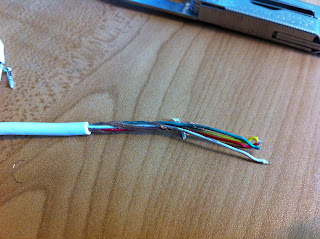 I had to skin the cable quite a bit back to get to a point where the wires weren't damaged. 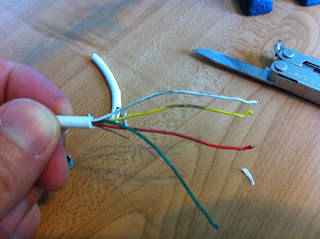 This reveals a shield wrap, plus 4 colored wires (red, yellow, white, green) which seems to match just fine with my bare terminals on the connector.

Unfortunately I couldn't find any one source of information that told me which colors coordinate with which terminals.  However there are quite a few sites outlining the different signals that come from the nun chucks, in trying to connect them into Arduino projects and such. 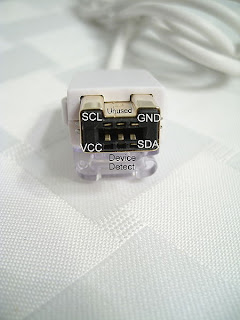 I found this picture on the WiiBrew website page that covered Wiimote/Extension controllers. 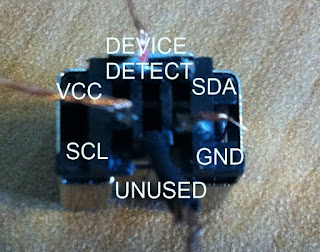 This works well as I can follow their labels through the back of the connector to know which terminal is SCL, GND, VCC, Device Detect, and SDA.  Now I just need to find out which color wires go with which signal.  It was then that I realized what was immediately apparent to my 9 year old....... Just open up one of the other nunchuck connectors and make it match.... Kids with their big brains.... pfffft! 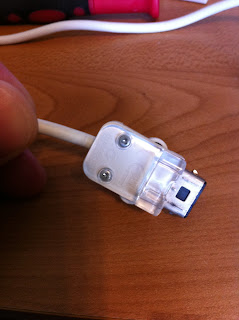 This was not without it's own issues.  The only other nunchucks we have are Nintendo branded ones.  And Nintendo found it necessary to put proprietary screws on the connectors.  Really.... Nintendo..... Really?! 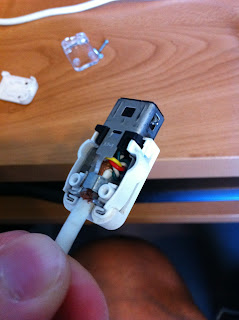 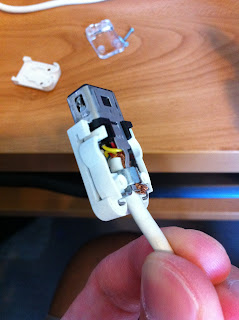 So, a very very small flat head tip was able to bite enough to remove the screws. Giving me enough of a view to figure out which colors needed to land on which terms. 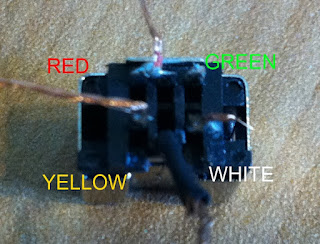 So that I end up with a map that looks like this.  And for those keeping score at home, this means that:

Hopefully this will be of use to the next part time repairman like myself.

So after a bit of stripping wires, some solder removal, re soldering of connections, and reassembly...... 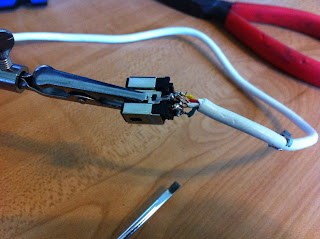 I realized that my soldering skills (and patience) weren't up to the level required.  Wires that are just way too tiny, in way too cramped quarters to keep from having shorts occur between them. 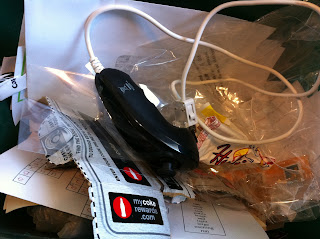 But in the end, it's getting filed under file #42.  The $15 or so charge for a new controller just isn't sufficient enough of a deterrent to keep me going at it.  No harm, no foul.  Always enjoy the challenge.  And maybe someone else will take the info and have better luck.
Posted by Spaten at 4:25 PM