Don't Throw Away That Lens! 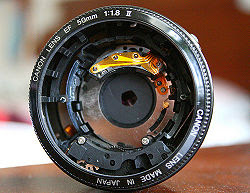 Well, if your lens looks as bad as the one above, this probably won't help you any.

However, a more common lens injury appears to be having the lens forcefully removed from the camera without unlocking it.  This can happen for a number of reasons: 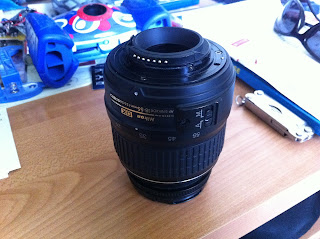 Any of these sort of incidents can result in the flanges that hold the lens in place on the camera bayonet mount, being snapped off.  In most cases, the mount on the camera body is made of metal.  So it's the plastic on the lens mount that will lose out.

A friend had broken one of their lenses through the "jammed due to sand in the mount method"... very creative.  Consulting with a camera store, they were told that it would cost some ridiculous amount of money to even look at the lens, more less fix it.  I of course quickly voiced that I'd gladly add it to my "stuff to maybe get repaired" collection.  It was of particular interest as I knew we both have Nikon DSLR's.

After having it sit around on my desk for many months.  I was finally prompted to do something with it.  There was obviously no way to magically make the missing pieces of plastic reappear.  So I started poking around online looking for someplace that sold lens parts.  Much to my surprise I found a few options.  There are a few camera stores that have a web presence and sell such parts.  I found the best deal from a seller on ebay.  So for $26 with shipping, I had a replacement lens mount on it's way to me.

Note of caution, there are many different types of lenses out there.  In my case I had to be certain that the mount was for an 'AF-S Nikkor 18-55mm 3.5-5.6G II  lens.  There were also mount rings out there for the first G version as well, and they are not interchangeable. 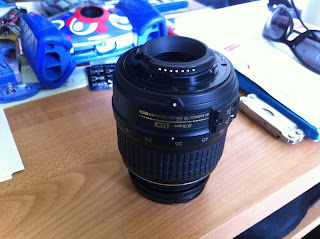 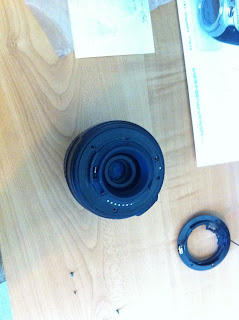 After receiving the part I set to taking it apart.  Quickly realizing there were more microscopic screws than I realized, I stopped and took a bunch of pics to record which screws were where, and how things were oriented.  The contact portion of the ring, that communicates between the lens and the camera, stays connected to the lens.  It's a bit precarious trying to lift it enough to remove it from the slot in the mount ring, without ripping out the ribbon connections to the lens.  But it can be done. 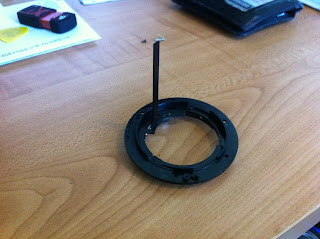 The Mount itself had a spring loaded inner collar attached to a long lever that feeds into the length of the lens.  Oh goodie,complications! 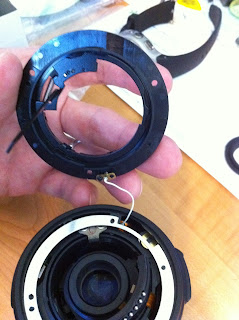 Once I removed all the screws and started to remove the mount ring I discovered complication #2.  A wire (maybe a ground?) running from inside the lens to a spring loaded pin.  Better yet, soldered to the pin.  I decided it wasn't worth trying to de/re-solder.  So I opted to remove the pin, and swap it with the pin on the new mount. 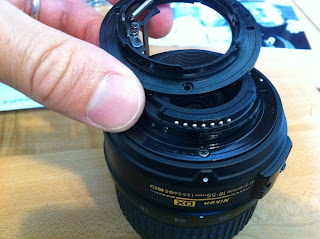 Carefully sliding the new mount ring in place, making sure that the spring lever slid back into the proper slot inside the lens.  Put all the screws back in place, and voila!  New 18-55mm Nikkor lens for $26.  All in all it was a bit more challenging than I had planned.  It has some crazy small screws that you'll have to fool with.  Make sure you're working on a surface that won't allow the screws to bounce onto the floor, as you may never find them. 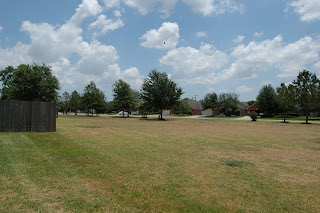 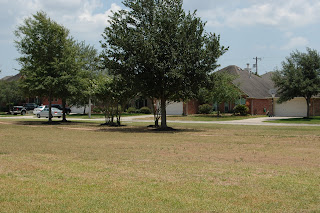 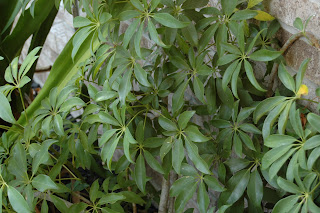