Robots! What a great hobby to share with my son! 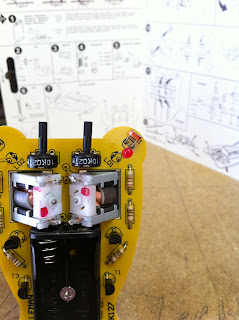 As my kids grow, like all parents, I'm sad to see the 'baby' in my children disappear.  However, I have certainly found that if you look....if you prod, poke, and present the bait.  You can coax those same looks of wonder and curiosity out of them.  It may simply be that you need to replace the wonder of a rattle with something a little more intriguing and challenging.

This particular story starts with a bit of a let down.  My middle son decided to put his name in for the robotics team at school.  He was quite excited with the prospect of what might be at hand, and so was likewise disappointed when he didn't get selected.  As any dad would do, I started to wonder what I could do to help beyond the usual comforting words.

A couple of days later I had tricked the boys into going to Fry's with me... if you don't have a Fry's electronics near you.... I'm truly sorry for your loss.  We're talking motherboards to oscilloscopes to capacitors to network servers.  Unfortunately for my family, going into a store like this with me, can rapidly spiral into a multi-hour event... usually ending with nothing purchased. 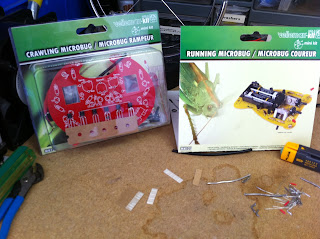 Heading out through the 'educational toys' I spotted a small 'robot' kit.  Is this just what I er 'we' need?  I turned to my 8yr old and asked if he was interested.  "Absolutely!" was the answer.  So much so that he was more than willing to spend his own allowance money on the $9.99 for it.  I was a little concerned that after any amount of effort in constructing this, that it might not end up working as described... but it all seemed worth the effort either way. 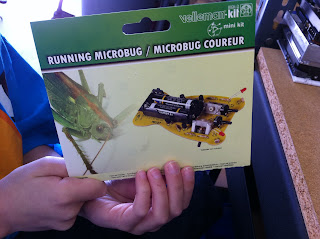 So we headed for home with our new robot kit. 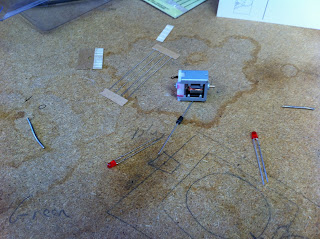 This particular kit was to build a 'running microbug'.  The package showed it as having two eyes (light sensors) on the front, and that it would follow a light source.  I was actually pretty impressed with the whole thing. 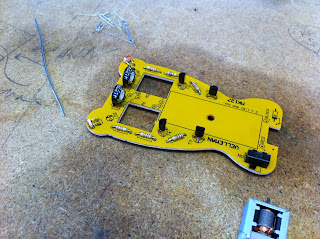 The kit contained a blank circuit board and all the resistors, potentiometers, transistors, diodes, switches, and motors that you would need for the project. 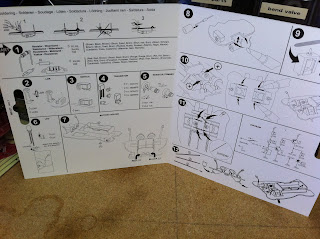 The instructions not only had a fairly clear step by step guide.  But it also had a full circuit diagram for what you were soldering together.  This was perfect for the hidden electronics lesson that I was able to slip in for my son. 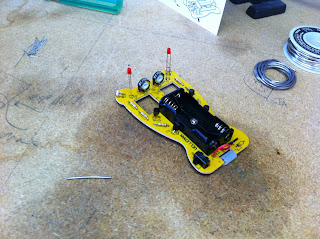 Basic electronics may seem like a bit much for an 8 year old.  But my dad would tell me that when I was little he would read me articles and talk about all sorts of topics that were 'over my head'.  I really think it had a profound impact on my interests then and now.  I don't think they need to understand everything.  They only need to find wonder and curiosity in what you are showing them.  That little something to create a spark.  They can learn ohm's law later. 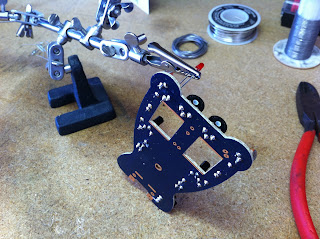 So we put it together.  He would help identify the components and where they needed to go on the circuit board.  I'd solder them in.  I was very happy to find that everything had a place, and that I didn't need to 'fix' anything.  Well..... I didn't have to fix any of the kit's mistakes... 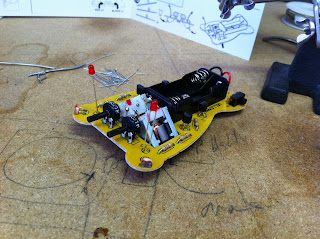 After the first build completion, I found that i had wired the motors polarities in reverse.  In my defense, the markings weren't all that clear.  Clip a jumper here, clip a jumper there, solder a couple of wires over the tops...... and there, better than the original design. 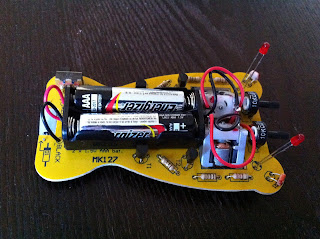 Amazingly, it worked.  I have to say, I was surprised.  Shine a flashlight near one side or the other, and the opposite motor starts to fire up turning the 'bug' towards the light.  Of course it's 'eyes' on that side light up as well.  The potentiometers let you adjust the sensitivity.  It's pretty zippy too!

One of the best parts was that he got to bring his home built robot to school and show his class and teacher.  They were all impressed.  Now he wants to buy his own bread board and a cool book I found called Robot Building For Beginners on starting robotics so that we can start building our own circuits for our own robots.  There's some really good info on the Robot Room website as well.

How much more can I ask for?  We now have a our own special interest.. one that we can work on together.  Little does he know, that I'm more elated over all of this than he is.  Of course, it'll be years before he realizes just how much.
Posted by Spaten at 10:14 PM