Where do all the good socks go? 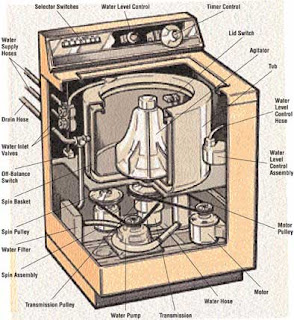 So, late Sunday night, the generally uneventful weekend made an early jump to Monday quality headaches.

A load of clothes in the washer comes to an early stop with the washer throwing some error code and allot of beeping.  This often happens when the load goes out of balance during the spin cycle.  So I opened it up, thew stuff around trying to redistribute it, and started it back up.  Only to have it occur again.

The third time it happened I realized something else was up.  It wasn't showing the "ub" error for unbalanced.  Instead it said "ld".... oh dear... the washing machine is on the fritz. 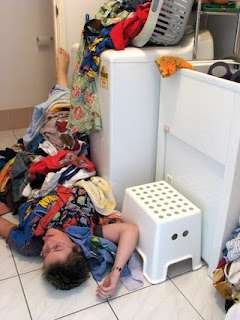 Now this may not seem so critical, unless you take into account the fact that we have three boys.  Even one day of no laundry has epic consequences.

Some time ago we had to replace our 10 year old set with a newer Kenmore Oasis set.  As with everything else, the easy and cheap to fix mechanical inner workings of a washing machine had mostly been replaced with boards and chips.  When this happened, I spent a bit of time banging around the internet looking for a maintenance manual for the washer.  Success for this type of info can be hit and miss.  There's allot of sites out there that purport to have manuals for all sorts of various things, and they'll let you see them for a fee.  Don't be lured in, just keep searching.  I'm pretty sure I stumbled on this one on a repair forum.

Turns out the "ld" code means 'long drain'.  It was taking too long for the water to drain from the washer.  Pulling the soaking wet towels and such out of the washer and sure enough, there's still 8 inches or so of water in there.  I put the washer in test mode, and forced it to run the drain pump.  To that I was greeted to a wonderful clicking noise that eventually just stopped to be replaced with what sounded like a locked up electric motor.... sigh..... where is that appliance part site link I always use.... Ah, RepairClinic.com, good site.  They show pictures of parts on 1inch x 1inch grid mats so that you can make sure you're ordering the right part :-)

So the wet stuff gets moved out and I start down the troubleshooting tree in the maintenance manual. 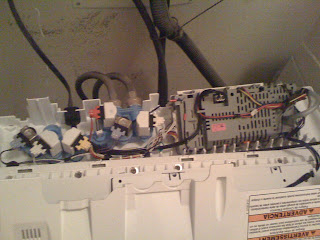 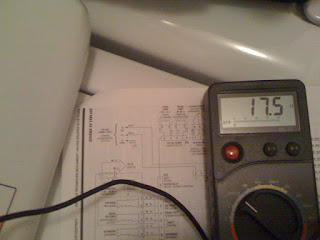 Next step, verify the motor resistance at the drain pump.  Now, this would be no big deal on my old machine.  In most cases ,on older washing machines, you can pop the front panel off the washer allowing you to do most maintenance with little trouble.  Well it appears that somewhere along the way the washing machine powers that be decided it would make more sense to put the drain pump on the bottom of the washtub.... only to be accessed by flipping the washing machine on it's front and working on it from the bottom

Remember, my problem is that it won't drain, ......... Now to get enough water out of the washer so I can lean it over, because I'll never get all the water out, and balance it against something so that I can work underneath it.  Nothing is ever simple

Wanna guess what happens when you suck water that's full of laundry detergent into a shop vac?  Yep... suds... lots of suds....  So the whole time I'm sucking the water out, soap suds are spitting out the top of the shop vac all over me, the laundry room, and my wife... yeah.... good times, good times. 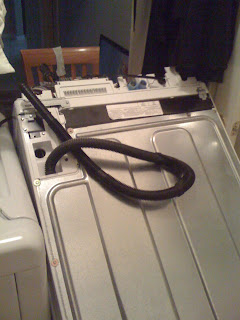 After way too much fun I finally get enough water out to tip it over and balance it against a chair. 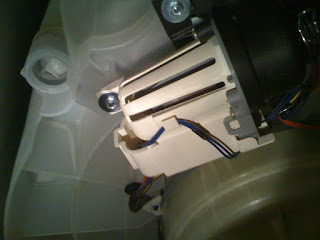 Before you start pulling off all the screws that hold a drain pump in place, just to get at the wire connection underneath. Take a closer look, the cover of the connector probably has a latch that will let it just flip out of the way.  I'm just sayin' 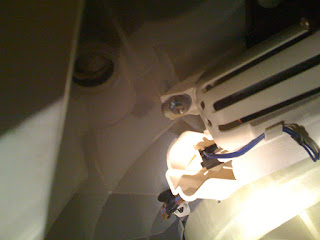 As expected, same resistance.  Sorta seemed obvious, but I figured I should humor the manual.  This means the problem is quite likely mechanical.

I disconnect the hose leading from the tub to the pump..... what's that white thing in there that I can barely see..... surely there isn't a filter inside the drain pump. 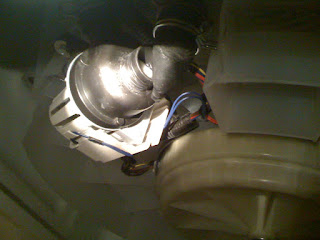 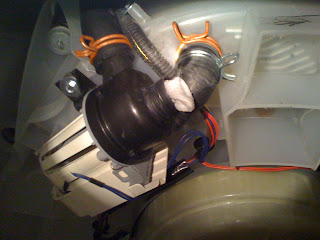 Well now it's clear what's happened.... and really shouldn't have surprised me as this happened once before in our old washer. 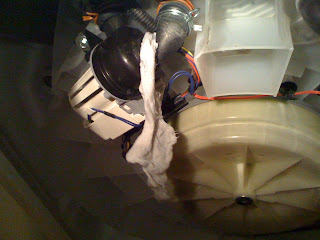 Yep, it's a quite gnarled kids sock.  Interesting part is, it's a 2T toddler sock.  Our youngest hasn't worn a sock this size for at least two years!  So I guess it's just been working it's way down a little at a time, over two years?! 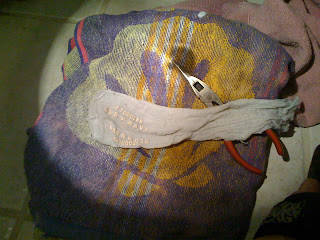 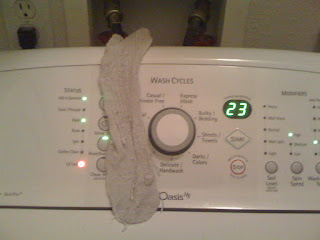 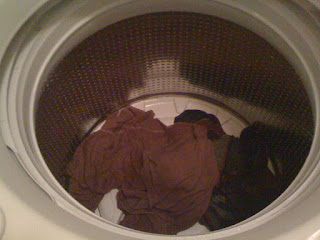