Ohhhh! That's why we have ants! 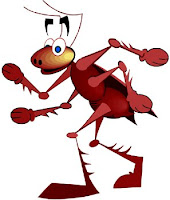 So, I get an message from my wonderful wife today that the ants are invading the kitchen.  Now, this was just the latest in an all weekend tale of defending the homeland from an invasion of ants.  It seems the ants didn't enjoy the torrential rains we'd been experiencing, and decided they liked it better in our kitchen.  First streaming in from this window, then that one, then the sockets... on and on.  After having saturated every point of entry I could think of with poison, inside and out, I thought we might be safe. 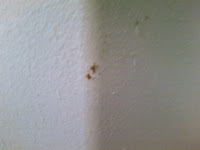 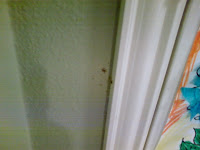 Then I get the pictures above in MMS messages.  It's hard to make out, but those are clusters of ants, little ant balls (huh huh). They seemed to be setting up shop here and there.  But had particular interest in the pantry.  I got a half panicked call from my wife.  Told her to pull things out, see if she could see where they were coming from, and nuke em.  Didn't hear back, so figured all was well.  And it appeared when I got home, that the invasion had subsided.

So, kids are in bed.  Wife went off to grab ice cream with a friend of hers.  I was finishing up some work.   Went to the kitchen to get a snack planning on coming back for some intense Warcraft development. 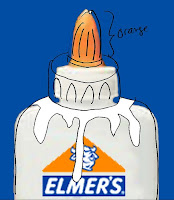 Took a step into the doorway of the pantry... and my foot stuck to the floor.  Like tacky, syrupy, glue kinda stuck.  WTF?!  So I start pulling stuff outta the bottom of the pantry to find a 12 pack of sprite in the corner, with a suspiciously dark (read wet) bottom. 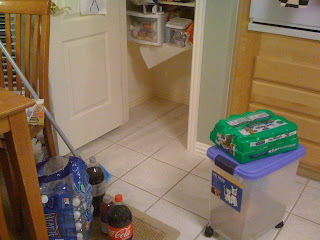 Pulling the 12 pack out, it's clear that the entire bottom of the pantry is soaked with either fresh wet, or 'aged' glue like sprite.  Apparently been going on for quite some time, as the side of the 12 pack had, uh, a growth of some sort on it.  Petri dish and bio lab, seeping sprite and cardboard in my pantry must have the same qualities. 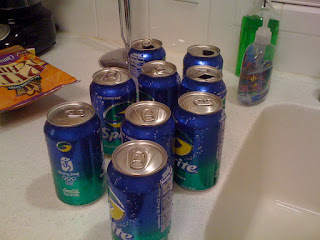 So I start pulling the cans out into the sink, figuring one can in there must have gotten pinched, crushed, or something.  What I find is two of the ten or so cans have burst, under internal pressure.  I'd expect this in the freezer, but in the pantry?!  Every other can in there was close to the same.  Under high pressure, to the point that if I tried to open it, the pull tab would just break. Too much pressure pushing back I guess.  I had to bash the pop tops open with a can opener. Which of course resulted in Sprite flying everywhere.  I did catch on after the first two, slow learner I guess.  I can't recall seeing a whole 12 pack of cans do that.  Almost think maybe they had something growing in them that finally pushed the pressure over the limit.  Gotta be a good growing medium with all that sugar, sitting in the dark. 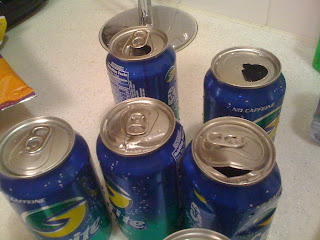 Wondering why this would happen.. I noticed an odd symbol on the side of the cans: 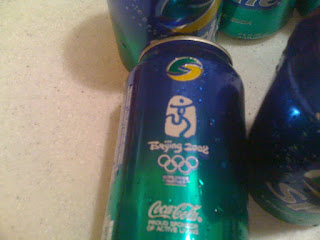 Yeah, that says Beijing 2008... guess they've been there awhile.  And maybe we don't actually drink much Sprite.
Posted by Spaten at 9:24 PM