Your hard drive will fail you one day... PREPARE! 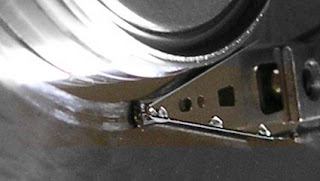 I am here to tell you that you will lose your data.  Not that you might, or that if you're not careful something bad might happen.  It will happen.  Maybe not today, tomorrow, or next week.  But eventually, you will have a hard drive fail on you!

Now, I'm the first to admit that I'm not the average computer user.  As I sit and type this there are 3 different LCD screens powered up displaying from 2 different computers, and one networked storage server.  There's an in use PC in the other room, an out of use one behind me, and no less than a dozen or so internal hard drives stowed away in various places around the room, a couple plugged into USB adapters and actively being used.  Sounds like I just might fit the description of 'geek'.....where have I heard that before? 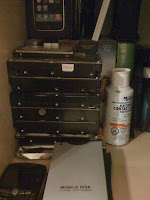 Anyway, the point is that my high level of usage has likely led to an increase in probability that I will run into hardware failures more often than the average person.  But my past experience with drive crashes have led me to believe that even if you're a casual user, if you haven't had hardware fail on you yet....... don't pack a lunch, it won't be long.  Get familiar with the wonderful sound known as the 'click of death'.  That sound can give me nightmares. 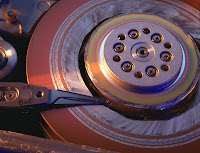 So your hard drive crashes, no big deal, right?  Well, that's for you to decide.  Ten years ago, for most people it may not have been much of a hassle.  I would hear allot of  "I only use my computer for email now and again".  Or, "I don't have anything important on it."  However today, it's harder and harder to find someone who truly doesn't rely on their PC on a daily basis.

Make a mental assessment of how you use your home computer.  Use it to balance bank accounts?  All that information is almost certainly on your hard drive.  Online bill paying?  The information may not be on your hard drive, but are you able to access another PC to handle paying bills, etc. until yours could be back on its feet?  Digital music collections?  How about filing your taxes, all your past years return information could be in there.  Do you run a home business?!  Depending on how you use your PC, these items may present only an inconvenience.  Or they may spell disaster. 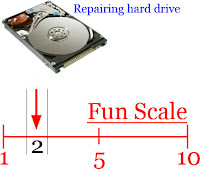 The item that brought me to a sober reality was digital pictures.  We, like many new parents in the digital era, bought our first digital camera only a few months after our first son was born.  As we were getting used to being able to take pictures whenever.  I was figuring out a way to handle filing away the ever growing number of pictures.  I realized just how quickly this was going to grow out of hand.  Thousands of pictures could be expected in a years time.  Then I thought 'what if the drive crashes'.  Even by 2000 when this all happened, I had already experienced hard drive failures, and how there's really nothing you can do at that point, but cry.  But realizing that a drive failure now could mean losing years of pictures of my children growing up, was down right nauseating.  This would be no different than losing all of grandma's photo album's in a fire or flood. 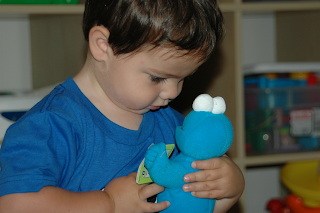 I immediately set out looking for a way to protect myself against such a catastrophe.  Over the years, I've employed a number of schemes.  Some good, some not so good.  Ten years of trials has led me to two rules:


Did I mention that you can never be too safe?

These suggestions are not intended to cover all issues that could arise.  For example, if you accidentally delete all your pictures and don't realize it for 3 months..... well these suggestions might not help you.  I'm trying to prevent a condition that would be out of your control, like hardware failure, fire, flood, or theft from destroying your data forever. 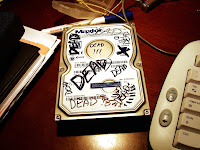 Now, before I get into what you should be doing.  I know what your initial push back is going to be when presented with spending money on such a thing.  What I want you to ask yourself is:  If you were standing there, and had just lost all your photos, bank information, tax information, music library (pick your soft spot) in a fire.  What would you pay, to have it all back?  Just keep that thought, that feeling of desperation in mind, and realize that everything that I'm pointing out is intended to prevent you from ever having that vomit on your shoes moment.

Lets look at the options:


Pros: it's cheap and easy
Cons: it's prone to failure and unlikely to be kept up with


Well, if you're simply stubborn and refuse to put anymore effort into it than this... then I guess something is better than nothing.  But I want you to think about how many times you've pulled a DVD out that you haven't watched in some time, only to find that your player can't read it.  Or Wii / Playstation / Xbox games that won't load any longer.  The day you turn to your burned DVD to save the day just might be the day you find out that your backup is no good.  There's also the issue of keeping the backups current.  This is much more difficult since it takes extra effort to sit down and burn discs.  How often do your air condition filters go unchanged because you forget?  You're also faced with deciding what to backup and what not to backup since DVD's only hold so much data.  If you do this as a minimum, then please do not keep the backups at home !  I'll explain this last part in the next section.

Pros: bigger capacity, not too complicated to setup
Cons: not as cheap as DVD's


I recommend the smaller ones that have 2.5" drives in them.  These are generally laptop hard drives, and have a little bit better capability for handling drops, jolts, etc.  Here you overcome a couple of the issues that I had with burning discs.  Namely the size limitations, and the likely hood that it will fail when needed.  Now, to be fully effective you need to use at least two of these, Drive_A & Drive_B.  One stays hooked up to your PC with Windows Backup, or OS X Time Machine doing it's regular scheduled backups to it.  This way you don't have to remember to do it!  But you need to have a second drive that is normally kept offsite such as your office, a neighbors house, etc.  Anywhere except where your PC and active backup drive is.  These two drives should be swapped out with each other every week or so.  The use of the drive is to protect against your main PC's hard drive failing.  Storing a second drive offsite is to protect against floods, fires, etc.  This way, even in the worst scenario, you should have a drive somewhere else, that at most would cause you to lose a week or so of data.  Portable drives today can be found for around $90 for a good 500GB drive.  That puts your whole backup solution at a cost of around $180.  Peanuts really.  Remember that nauseous feeling I told you about? 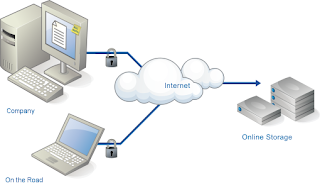 Pros: they manage it
Cons: monthly fees, can be slow


Another option is to use an online backup service, such as Carbonite.  The great part here is, you don't have to manage it.  You basically sign up, install some software, point to what you want backed up, and forget about it.  The software takes care of it for you, and if you're backing up a laptop that goes on the road with you, it can backup from wherever you are, as long as you have internet access.  This option can prove to be slow at the start.  Particularly if you have a slow internet connection.  But once initial backups are made, the system only backs up files that have changed.  This is usually a much smaller set of data, on a daily basis to backup over the internet.  If you have a situation that requires restoring of data, you can simply access those files online and restore them.  I haven't had to use a service like this, but have friends that have had their Mac's resurrected this way.  It works, it's what they're in business for.  The down side of course is that now you're paying another monthly fee to someone.

Pros: biggest capacity, no downtime, covers most bases
Cons: not cheap, reasonably complicated for the non-geek, network access to files


This is the solution I use, ReadyNAS NV+.  The ReadyNAS DUO is a bit cheaper, and there are many other options out there.  I admit, it's not the cheapest way to go.  In addition to the cost of  a couple of portable drives.  The NAS device itself can run around $350-$500 with a couple of hard drives already installed.  The 'NAS' box is basically a small computer that has no keyboard or monitor.  You configure it through a web page like you would your wireless router.  You create shared folders on it in the same way you might share folders on your PC to another PC.  This being one of it's cons, that files you access on it are being pulled over your network.  This is always much slower than accessing them on a drive that is in your PC.  But that's the point, the files aren't in your PC.  This allows me to completely reinstall an operating system, without worrying about accidentally losing my personal data.  It's all stored on network shares on my NAS. 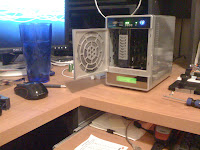 I recently had to exercise this one when one of my drives failed..... fortunately everything worked as planned.  I was even able to replace the drives relatively seamlessly with larger ones. 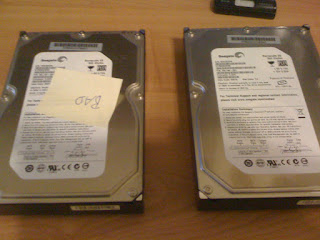 Most decent NAS devices can house 2 or more hard drives.  The minimum being two drives, configured as a RAID 1 or 'mirrored' volume.  What that means is that the two drives mirror each other.  So for each file written to the NAS, two copies are made, one on each drive.  A down side to this is you only have half the total storage that you think you have.  The upside is you can have a drive completely fail on you, and can continue to use your files as normal.  You just need to get that failed drive replaced ASAP.  Again, this part of the solution only covers you in the event of a hardware failure.  That's where the portable drives come in again.  To provide a way to get the most critical data offsite, just in case.  Yes, I know, all together your looking at spending as much as a whole computer on this solution...... Did I mention that nauseous feeling yet?

Did you hear something? ...