As dad, how do you prepare to handle the death of a pet? 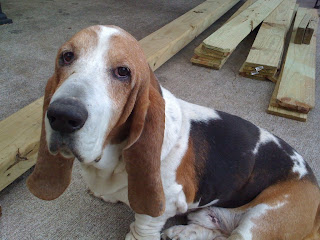 Early last week our very loved, very old Bassett Hound, Simon, started acting a bit odd.  Now, the first thing a vet might ask is "any changes in his energy level?"  Well, he's a Bassett Hound.  He's spent around 20 of 24 hours each day sleeping, for the past 5 years.  Its just what they do. 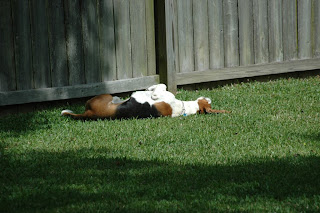 But his regular behavior has changed.  He's a crotchety old man who for years now would start barking as soon as the sun started to set.  This, so that he could be let in and go to sleep for the night in the garage.  Now, he's decided instead to just sleep outside, all night.  And then there's his eating.  Yes, it's hot as hell here and he always eats less in the summer.  But the other night I had to pretty much put a piece of peanut butter sandwich in his mouth before he would take interest enough to eat it.  For a dog, that's insanity. 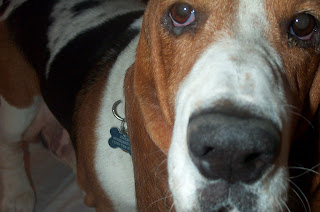 I've brought him to the vet, it's the oh so common "there's a mass in .....", in his gut.  He gave him a steroid shot to hopefully help with the problem, but expects it to only be a short term, temporary fix.  I'm hoping maybe it's something that's been there a long time, and really isn't a problem for him.  That maybe it's just the up tick in the heat as of late that's caused his changes..... but I do think it's only a hope......

I mentioned that he's old.  He's old for any dog, but particularly for a big dog like a basset hound.  He's 12.  The vets office has an aging chart.  For big dogs it stops at 11.  Good thing Simon can't read ;) 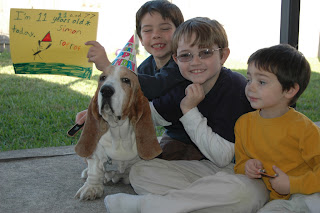 Twelve years old, that's older than our oldest son.  Thinking back, I just now realize how much Simon has seen. When we got him as a puppy, we had only been married for a couple years.  He's was with us when we moved into our first house.  Brought home our first child.  When we packed up and moved to another state.  Been with us in the direct path of one flood, two hurricanes, and one tornado.  He's watched us grow from a young couple, to a family.  And seen all of the heartache and joy in between. 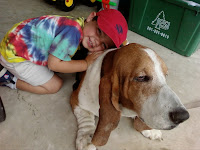 My boys don't know a life without him.  We lost the older of our two Basset Hounds some years back.  The boys were much younger then, and didn't really realize what happened.  It wont be the case this time around.  The older two will probably always remember this.  The youngest may forget some details, but he'll remember Simon to some degree.  The bottom line is, this time, they will all realize that they've lost something.

As a dad, I've played this scenario through my head many many times.  I've been doing it for a couple of years now, I did mention he's old.  When it might happen.  How we might find him.  Who might find him.  Would my oldest come back from going to get Simon out of the garage to say that he can't wake him up?  Would my youngest go out to play on the swing set and come back in to say that Simon looks funny? 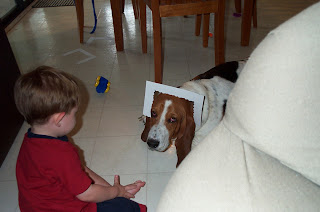 What do I say to my boys?  For someone who spends way too much of his time planning for things, I can't seem to work out in my head what that conversation is or needs to be.  I can see my boys in my mind, sad.... but I can't seem to see what they would say, and so, can't think of what to say in response.  I do think I'll definitely talk to them ahead of time.  There's a balance to preparing them versus worrying them.  But in the end I think they'll be better off to know it's coming.  I don't really want to say anything just yet, just in case that 'hopeful' condition plays out.   But even if it does.  If it's not today, tomorrow, or next week.  It'll be in the future.  Probably sooner than later. 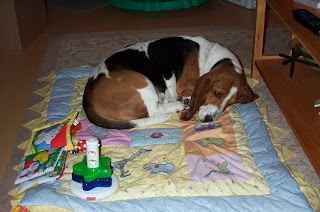 As dad's we spend a lot of time preparing, planning, protecting our families.  We task ourselves with remaining objective and aware despite what might be going on around us.  And our families look to us as such.

So, on Father's Day, I ask: As dad, how do you prepare to handle the death of a pet?  I guess you don't handle it.  You live it, along with the rest of your family.